A virtual tour of a wedding venue in France

Come and visit the location in person or opt for a videoconference tour of the wedding venue. If you are simply unable to travel, take the virtual tour via your smartphone, tablet or computer. The team at Château de Vallery is here to welcome you via the following Apps:

Zoom (recommended, allows to visit in multiple duplexes with friends and family)

Technology is here to bridge the distance between us, allowing you to explore our fabulous location down to the finest detail. Learn everything there is to know about the château, the events we host and - most importantly - your very own reception! First of all, contact our team by telephone at +33(0) 386 977 700 or via our information form. You will then be free to set a rendezvous via the App of your choosing and discover the château’s gardens and reception rooms. And let us not forget our 28 historical - and truly extraordinary - rooms, our swimming pool near the ramparts on the lip of the forest and our private tennis courts.

Experience the château, its amenities and the location’s sheer romance from the comfort of your home. Let us be your guide and feel free to give us your input during our wonderful interactive stroll.

Instead of a video call, you may prefer a swift tour of the château by watching the following video. Enjoy a tour under the April sun produced by our "fantastic team". 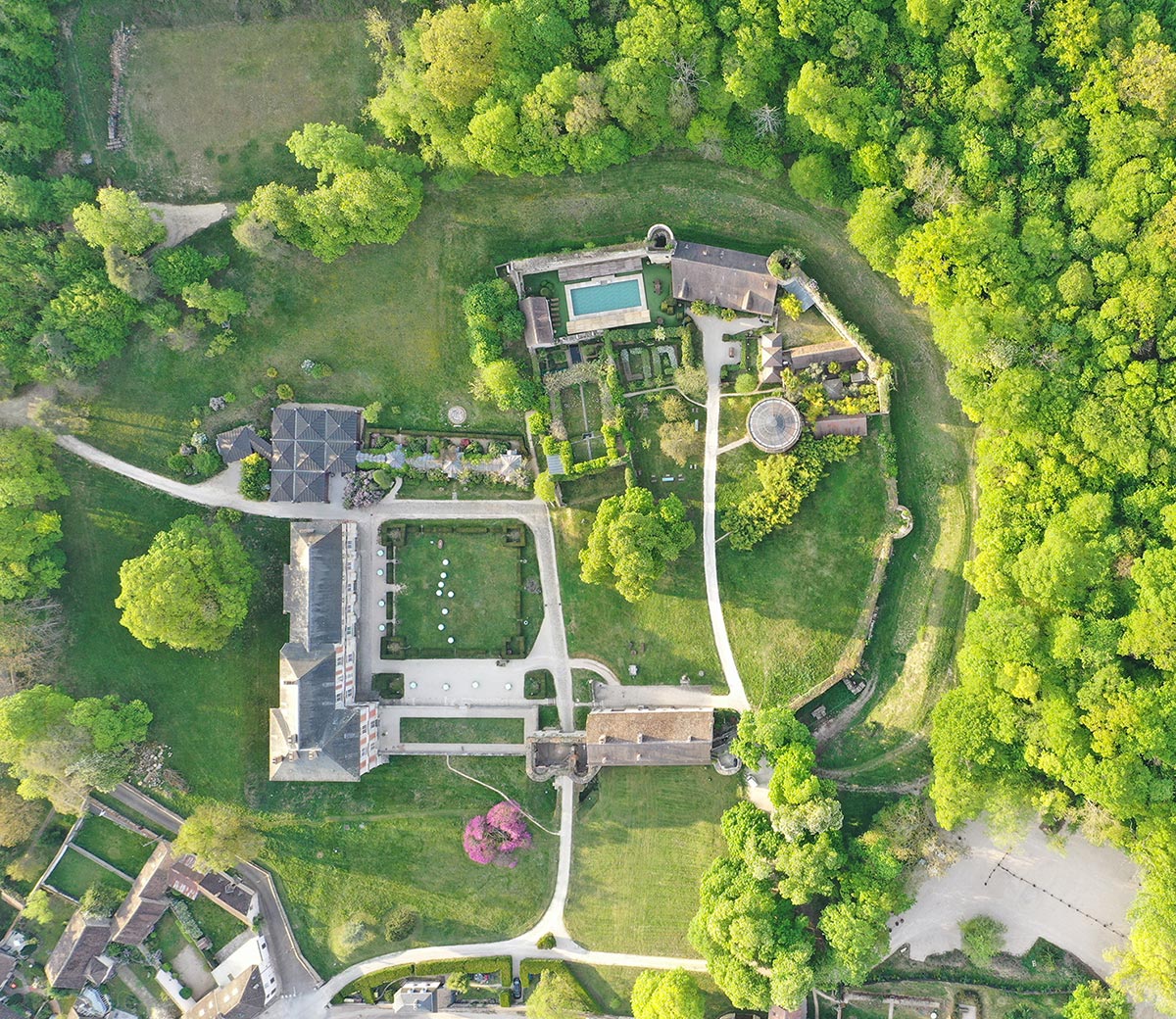 Welcome to the property


Whether you’re inbound from Paris - located 100km away - or elsewhere, the road to the château passes through the village of Chéroy. A country road leads through the peaceful and serene countryside before reaching the village of Vallery. Over the last few kilometres, the château’s location is clearly signposted, before it appears on the edge of Place des Condé. The property’s majestic gates lead to a shaded car park on the edge of the woods, equipped with terminals for recharging electric vehicles. Time to embark on a delightfully bucolic stroll around the wedding venue, be it virtual or in the flesh...

The path to the gardens leads us around the Medieval Château, jutting out between the 12th century ramparts. The ground floor of this medieval relic features 2 suites that are accessible for mobility-impaired guests. Adjacent to the Medieval Château, the Sally-Port leads over the moat through the property’s ancient doorway. A small pathway circles the Judas tree and its crimson flowers, past the Sally-Port to our 12th century vaulted cellars. The latter is regularly used to host Grand Cru wine-tastings on the day before a reception.

Above the medieval cellars, a belvedere reveals the relics of the château’s Renaissance wing. The latter was destroyed in 1740 but can still be admired in the engravings by Androuet du Cerceau. The belvedere extends towards the Renaissance Château, which dominates the gardens with magnanimous stoicism. The ground floor is home to the reception, private lounges and a jewel from the Renaissance era: the Grande Galerie. The upper floors host the Salle des Tentures and 16 of the property’s 28 rooms and suites. Discover all of our Renaissance architecture in the video tour of the wedding venue.

The gardens are located to the east, in front of the Renaissance Château. Yew tree groves surround the central square and glint with the light of a thousand lanterns come nightfall. The gardens also face the Old Chestnut Tree, where laser and pyrotechnic shows are held to set your events ablaze.

To the west, behind the Renaissance Château, stands the majestic 7-trunked Sycamore tree, over three hundred years old, under which religious and secular ceremonies are often held. But now, let's continue the virtual tour of this french wedding venue by another curiosity...

The Arbour closes off the upper part of the central square. It is characterised by a succession of flower beds surrounding a zinc structure. The latter’s plant-laden roof is made of ancient finials covered in wisterias and honeysuckle. To crown off the Arbour, a traditional Saint John Bonfire is set up in a stone circle.

The Arbour joins up to the Music Room. It is made of several pavilions that connect to form a large hall, decorated with illustrations of ancient musical instruments. A covered passageway links it up to a separate 40 m² pavilion: a high-tech kitchen reserved for caterers.

Finally, the Church Path cuts between the Music Room and the Renaissance Château towards the property’s second gate. It leads to the church in Vallery - restored in 2014 - which faces the château. (A slightly more complex part to explore this french wedding venue virtual tour by videoconference because of distance)

To access the Dovecot, one walks through a delightful botanical labyrinth, starting with the Rose Garden. This open-air enclosure often hosts wedding ceremonies. Next, we pass the orchard, popular for post-wedding cocktail parties, before reaching France’s largest Dovecot. This renovated three-story structure is topped with a circular glass roof, through which newly-weds can enjoy Burgundy’s starry sky.

Adjacent to the Dovecot, the Palm Grove is home to 2 small buildings located on either side of a Balinese gazebo: 4 rooms of Indonesian inspiration will prove perfect for those in search of exoticism.

Finally, the Oriental Pavilion stands against the ramparts. On the ground floor, an authentic Riad features furniture imported straight from Marrakech. It hosts Henna ceremonies and functions on the days before and after the festivities. The upper floors include one suite and two rooms inspired by the road to India. At the very top of the property, the Oriental Pavilion gives direct access to the adjoining swimming pool. Also named "Grand Bassin", this heated pool is flanked by 2 reed arbours where guests can enjoy the shade to eat, drink, dream and exchange around the basin.

Bridle paths surrounded by thick greenery form a series of mind-blowing angles throughout the property’s 60 hectares of forest. In springtime, their beauty is unique to Vallery. For strolls, the path along the ramparts proves very popular: the ramparts constitute living remnants of the Middle-Ages. The path allows one to envision Vallery as a former medieval citadel filled with 5,000 armed men.

...virtual tour via the map

Our interactive map offers a precise view of the property’s atypical configuration. Click on the "eye symbols" and discover each location in a short video. Thus, you have experienced the virtual tour of this french wedding venue in every possible way. We hope that it will lead you to Vallery! 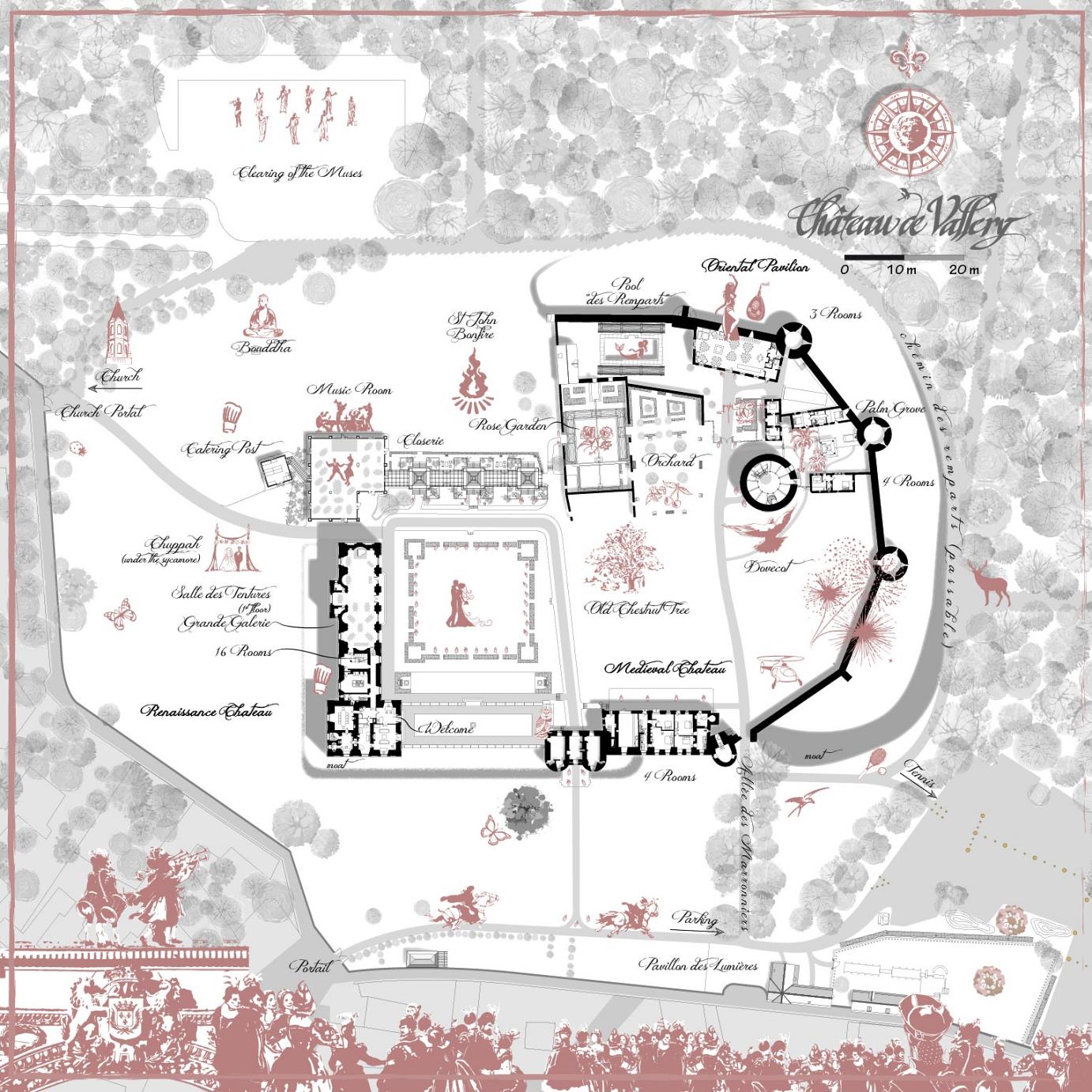 (thanks to Life'S Events)